Several photos have been shared hundreds of times in multiple Facebook posts which claim they show leaked copies of an entrance exam for a medical college in Pakistan. The posts also feature a photo of a handcuffed man alongside a claim he was detained for his involvement in the leak. The claim is misleading; Pakistani authorities denied the exam paper was leaked and said several people were arrested for allegedly selling fake test sheets; the structure of the purported test seen in the posts does not correspond with the structure of sample tests on the Pakistan Medical Commission’s website.

The post’s Urdu-language caption translates to English as: “Today’s medical entry test paper was leaked before time. One accused was arrested. This is the condition of this system.” 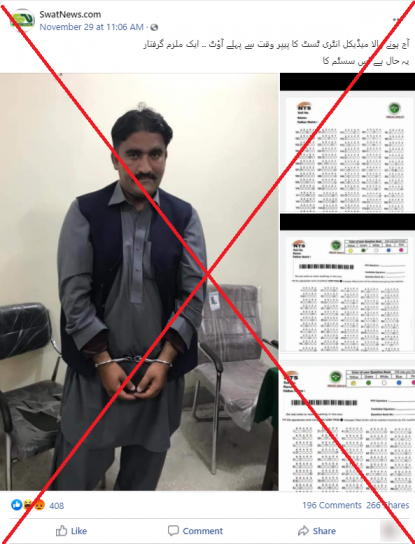 The claim, however, is misleading.

In response to the misleading posts, The Pakistan Medical Commission, an official agency that regulates medical practice in Pakistan, said a group of people had been detained for allegedly leaking fake exam papers.

“The [Federal Investigation Agency] arrested a group of individuals trying to sell fake MDCAT question papers to students. The papers obtained from their custody are fake. The MDCAT examination has started and remains fully secured,” the commission said in a statement published on their website on November 29, 2020. A screenshot taken on December 3, 2020 of the Pakistani Medical Commission announcement on its website.

The commission also posted the statement on Twitter here.

The arrest of several people accused of selling fake exam sheets was reported in Pakistan media here and here.

A closer examination of the purported exam paper photos shared in the misleading Facebook posts also suggests they are not authentic.

Sample tests on the Pakistan Medical Commission website show that the exam’s multiple choice questions include four answers: A, B, C and D. The photos of the alleged leaked exam show five answer options: A, B, C, D and E.

Below is a screenshot comparison of the official sample test (L) and the photo of an exam being shared in the misleading Facebook posts (R): 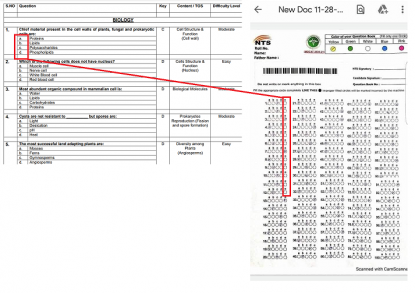 AFP was unable to locate the source of the photo of the man in handcuffs.

Fix this WhatsApp fear! Here is what your phone will get; check leak