Infinix has been teasing some major changes for its smartphones. The company teased revolutionary technologies such as a 160W fast-charging and also promised to bring periscope cameras to its smartphones. In fact, the latter has been delivered with the recently released Infinix Zero X smartphones. However, that is the only “Premium” aspect that these devices have, as they still bet on old 4G MediaTek chipsets. The 160W fast-charging also didn’t appear in a commercially available smartphone, and we don’t think it will appear this year. Despite this, the company seems to be preparing more smartphones for this year under its Infinix Note series. If they will come with revolutionary technologies, only time will tell.

The fact is that Infinix is preparing a new smartphone to fill the gap left in the Infinix Note series. The device will serve as a successor for the Infinix Note 10 series and today a set of leaked renders have been revealed by GSMArena. According to the report, the new smartphone is, in fact, a new Infinix Note smartphone. However, it’s a new generation and will leave the “10” behind. It could come with Infinix Note 11 or even Note 20 moniker. The device has a rectangular camera bump with three modules. The primary one is a 64 MP shooter which is on par with current releases in the mid-range market.

Going by the labels behind the device, there is also a “30x telescope zoom” feature in the device. However, it does not come with a periscope module. So we assume that this uses a telephoto module which boosts the digital zooming capabilities.

The leak also gives us a sneak peek at Infinix’s new UI. The company ships its smartphones with a skin dubbed XOS, and apparently, it has passed through some adjustments to deliver a new look. The icons and widgets have been redesigned, but we don’t know how deep the changes go into the software.

There is also the last image showing three smartphones, and apparently, they’re just different colors for the same handset. There is a subtle stripe pattern that alternates between lighter and darker shades. Apparently, we’ll have a Blue colorway, Dark Gray, and some sort of Space Gray colorways. 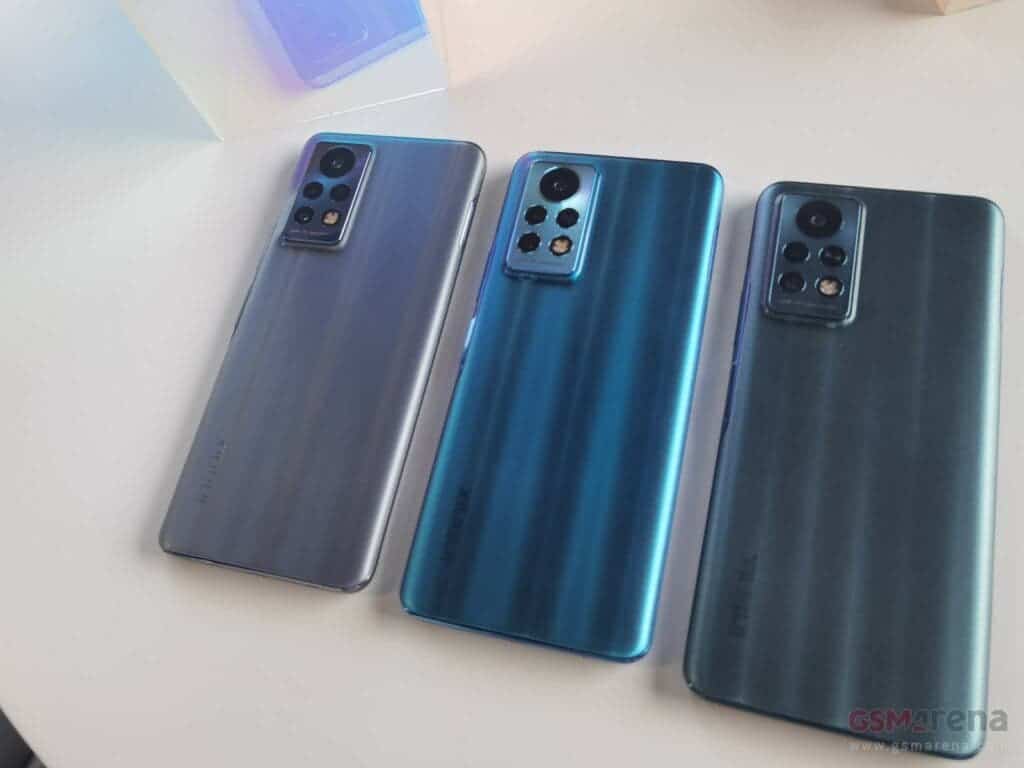 For now, there is no official Infinix event on the calendar for now. So, it’s not easy to say when exactly Infinix will be rolling out this smartphone. We expect a teaser campaign to start shortly before the release. Moreover, the company will likely introduce it in India.

Apparently, this handset is the very same Infinix Note handset that leaked a few days ago. The device will come with a 120 Hz refresh rate display with a top-center punch-hole. We assume that it will use the newest MediaTek Helio G96 SoC since it is capable of offering high refresh rate.