There’s clearly a market for cheap things in the United States. Market data portal Statista said this on May 28:

Those were all periods of significant economic expansion and lowering unemployment. Yet the desire for savings runs deep.

Hardly a 21st century phenomenon, consider Walmart’s (NYSE:WMT) epic rise in the last few decades of the 20th century. It was so intense it prompted talk of the “Walmart Effect.”

According to The Street, it clinched the title of America’s largest retailer in 1990 – something I can attest to personally. Back when I was a developer, some of the most profitable real estate opportunities could be found adjacent to the enormous discount influencer.

That’s where the traffic was almost always going to be guaranteed in America’s apparently insatiable demand for cheap goods. 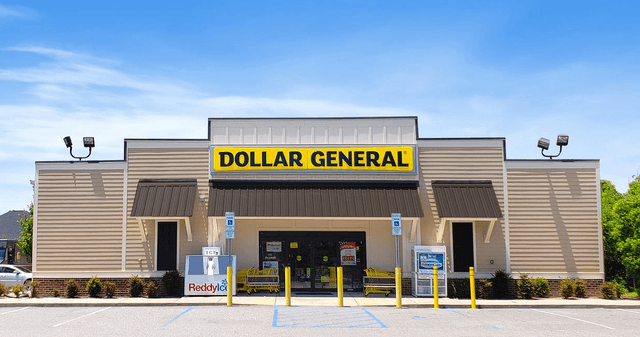 There’s the Target Effect Too

None of the commentary above is meant to be either a negative or positive commentary on Walmart (or dollar stores). I know there are pros and cons to consider on local, national, and international levels alike.

For this article, though, let’s just agree that the Walmart Effect was, has been, and no doubt will be real for some time to come. It’s inspired discounters across the retail board, such as:

Nor should you forget about TJ Maxx, Marshalls, or Ross. All three mini-department stores sell big-brand names at off-market prices. And all three do big business combining customers’ desire and/or need to spend less with the almost universal craving to look good regardless.

With the exception of Hollywood-esque circles where spending tons of money is a badge of honor, the idea that we’re getting the most for the least is an extremely tempting offer.

Which brings us to the so-called Target Effect.

Two summers ago, Pymnts.com wrote about “The Shopper’s Brain on Bargains,” acknowledging the unique satisfaction of getting what one wants at a reduced price.

“‘We can’t remember [the] last time we left without spending $100!’ Jen Coleman and Laura Wiertzema, the duo behind popular Target fan account @targetdoesitagain wrote to Refinery29 via email. ‘It’s almost like Target knows we won’t feel bad adding some cute dishes or a dollar spot item for $2.99. You leave feeling happy because you got some new bowls or a new pair of shoes, and you didn’t break the bank. It’s instant gratification!’”

For the record, yes… Target (NYSE:TGT) knows exactly what it’s doing. And so should you.

Bargains, Bargains Everywhere but Not a Drop to Drink

If you haven’t guessed already, that euphoric spending on “cute,” cheap items is the Target Effect. It’s even warranted an entry on the popular (though far from reverent) Urban Dictionary as:

“The result of going into a store intending to buy a few things and leaving with much more. Frequently happens while shopping at Target.”

Meanwhile, Pymnts muses how, “at some point, common sense should intervene.” But that’s apparently not how our brains work. Apparently, buying a perceived bargain makes us feel like we accomplished something – even something others haven’t, which makes for an even bigger dopamine hit.

“‘There’s a physiological response when we feel like we’ve won something. And I think people really look for that and want that…” Dr. [Kit] Yarrow said. ‘When you do score something, it feels great, so you have this burst in dopamine, and people want that feeling again… it causes a lot of shopping errors.”

I don’t know about you, but I don’t need a consumer psychologist and professor of psychology and marketing at Golden Gate University – which Yarrow is – to list off some of those mistakes. I’ve committed a few of them before, such as:

It’s that last one I want to discuss today in the form of high-yielding dividend stocks.

I understand the allure. Believe me. I might be Mr. Caution when it comes to such things, but that’s partially because I’ve been hoodwinked before.

So, before you buy up all those perceived bargains, stop. Take a deep breath. And ask yourself: Is this too good to be true?

In the following real estate investment trusts’ (REITs) case, it is…

Thanks, but I’ll Pass

As many of my readers know, I spend hours and hours analyzing REITs to buy, and I really don’t spend enough time researching one’s to avoid. Hence, the reason for this article today, and my insistence to avoid these two REITs below.

American Finance Trust (AFIN) is a retail REIT with a portfolio of 814 net lease properties and 33 multi-tenant properties. The company is externally-managed by AR Global, a New York-based firm that was previously associated with American Realty Capital (formerly ARCP), now VEREIT (VER) and is now external advisor to Global Net Lease (GNL).

I have always been somewhat skeptical with the conflicts of interest related to AR Global and its two “competing” REITs, GNL and AFIN. Although these REITs have different management in place, it makes no sense for two large REITs (AFIN’s EV is $2.3 billion and GNL’s EV is $3.2 billion) to maintain the AR Global manager (except for the fact that AFIN has “limited rights to terminate” and has a 20-year agreement that does not expire until April 29, 2035).

The agreement may only be terminated under limited circumstances and this makes it difficult to renegotiate the terms or replace the Advisor “even if the terms of (THE) advisory agreement are no longer consistent with the terms generally available to externally-managed REITs for similar services.”

Another factoid worth noting is that AFIN has always maintained a very unhealthy dividend.

In 2019, the company’s cash flows were $105.6 million and the company paid out $121.8 million in dividends, which included the Class A common and Series A preferred shares. So, it was no surprise to us when AFIN decided to cut its dividend during the COVID-19 pandemic from $.09 per share (paid monthly) to $.07 per share.

And based on analyst estimates, it appears that AFIN will generate roughly $.88 per share in AFFO in 2020, barely enough to cover the new dividend payout of $.84/sh (for the common). Thus, even after a 22% dividend cut, AFIN’s current yield of 13.8% screams “sucker yield”.

The other problem haunting AFIN is its elevated cost of capital.

Although the company has pursued a business strategy to invest in higher quality properties leased to investment grade tenants, its cost of capital is elevated, and this makes the profit margins narrower. The company’s WACC (weighted average cost of capital) is in excess of 8% and this makes it difficult for the company to be competitive versus the likes of Realty Income (NYSE:O), Agree (ADC), and NetSTREIT (NTST). 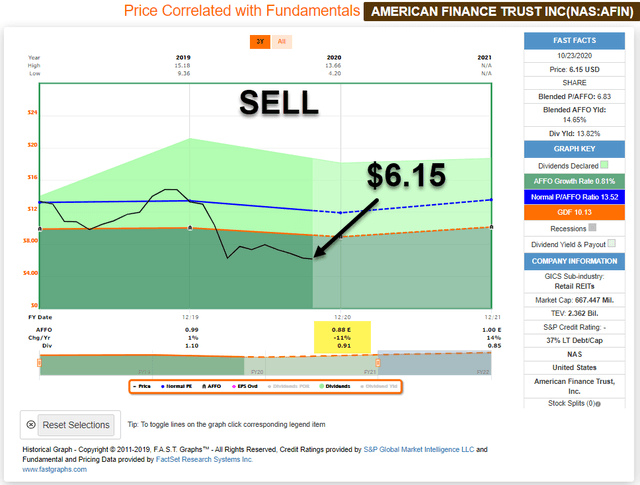 Washington Prime (WPG) is another REIT that we are continuing to avoid at all costs. In a recent investor deck, the company explains,

“With about 100 town centers throughout the US, we’re as American as apple pie. As a matter of fact, we are also as American as deep dish pizza in Chicago, Hawaiian poke salad, vegan spring rolls in Malibu, El Paso Tex-Mex, Maryland crab cakes, kimchi in Orange County, Memphis barbeque and a Kansas City porterhouse.”

Well, I don’t know about you, but after reading this menu, I’m feeling a little bit sick in my stomach, especially after this all-American REIT has seen shares tumble by over 82% year-to-date.

I’ll give the management team credit; they are still including the words “Grinding It Out” in the latest (September 2020) investor deck: 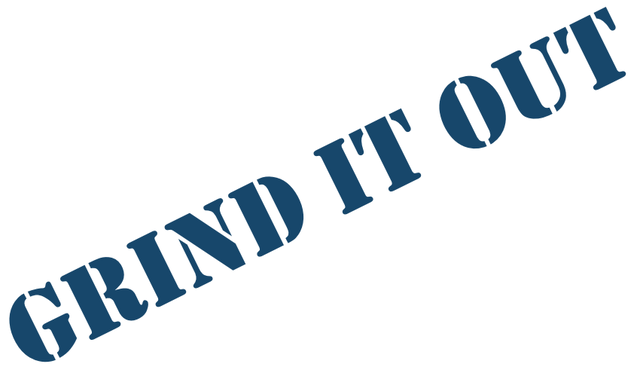 All mall REITs, except for Brookfield Property (BPYU) have either cut or suspended their dividend, as a result of COVID-19. WPG’s $.25 quarterly dividend is now ZERO.

Now, I’ll be the first to say, I’m also “grinding it out” with Tanger Factory Outlet (SKT), having recently re-established a BUY. And Tanger is also one of the mall REITs that suspended its dividend.

Also, one positive for WPG is the fact that the company has 40% of NOI (net operating income) in open-air properties that generate 3.5% NOI growth (over the least 5 years). However, it’s the 43 enclosed assets that give me heart burn, and one of the primary reasons that I’m sticking with my SELL recommendation. 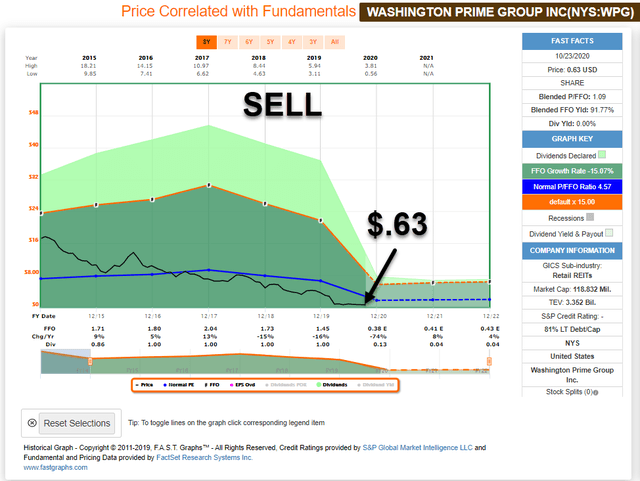 At iREIT on Alpha, we are always skeptical when it comes to dividends, and that’s one of the reasons we stress test each company, based on a number of dividend safety metrics. Our iREIT iQ score for AFIN and WPG are as follows:

WPG scores 48 and AFIN scores 47. This ranks them as two of the lowest quality REITs in our coverage spectrum.

And this brings me to my closing remarks, and back to the title to the article – High Dividends Don’t Mean Great Bargains.

So many good REITs these days are being disregarded, and as Buffett reveals, price and value are not always the same. One revelation, and often misunderstood part of the “price is what you pay” paradigm is that over the long run, price will approach value.

At iREIT and Dividend Kings, we spend considerable time on selecting the highest quality names, because we recognize that is the secret to sleeping well at night. And in the case of AFIN and WPG, “when you lay down with dogs, you wake up with fleas”.

Author’s note: Brad Thomas is a Wall Street writer, which means he’s not always right with his predictions or recommendations. Since that also applies to his grammar, please excuse any typos you may find. Also, this article is free: Written and distributed only to assist in research while providing a forum for second-level thinking.

At iREIT, we’re committed to assisting investors navigate the REIT sector. As part of this commitment, we recently launched our newest quality scoring tool called iREIT IQ. This automated model can be used for comparing the “moats” for over 150 equity REITs and screening based upon all traditional valuation metrics.

Join iREIT NOW and get 10% off and get Brad’s book for FREE!

Disclosure: I am/we are long SKT, BPYU. I wrote this article myself, and it expresses my own opinions. I am not receiving compensation for it (other than from Seeking Alpha). I have no business relationship with any company whose stock is mentioned in this article.

Beijing Protests a Lab Leak Too Much